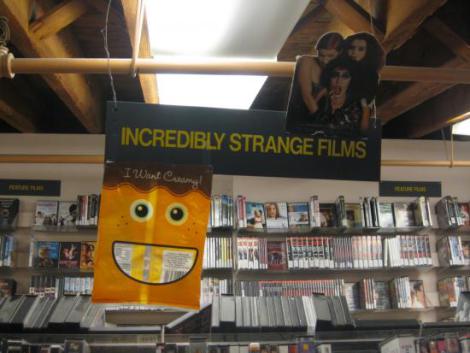 I write for the Portland Press Herald, which asked me to write about the impending (August 15th) closing of Videoport, the video store where I’ve worked for the past 15 years. So, you know, one of my jobs paid me to write about me losing another one of my jobs, which is nice, I guess. Anyway, I got a little melodramatic, which I tend to do. Still—I’ll miss the place. I felt home there.

The factors are – well, just one factor, really: convenience. Or, if you’re being less charitable, laziness. Despite the fact that its name, when casually dropped by a customer at Videoport, functioned like needles in employees’ eyes, Netflix’s push-button ubiquity spelled Videoport’s doom from the moment it went online. There was still hope when their business model relied on the postal service delivering scratched DVDs of a movie people thought of watching two days earlier, but when its streaming service meant that American consumers could remain on the couch and numb themselves out with all the undifferentiated distraction of cable television, we were effectively sent into hospice care.

You can read the rest of the article here. And, if you wanna see what a bunch of movie nerds who loved their video store look like when they write over 1,000,000 words about the place looks like, then check out the retired Videoport blog, The VideoReport. And if you’re miraculously lucky enough to have an independent video store near you and you let it die, then I don’t wanna know you.

This entry was posted in Me stuff and tagged Me stuff, Videoport. Bookmark the permalink.